In their own words: Henry Corra

Henry Corra has been making documentaries for twenty-five years, producing in that time a total of twelve feature documentaries and over twenty shorts. In college he saw the movie “Grey Gardens,” made by the Maysles brothers, which he describes as “the most extraordinary odd and beautiful film I had ever seen in my life.” Inspired by their work, when he got to New York in 1980 he went to Maysles Films and asked them for a job and they hired him.

Corra's latest film, the “Disappearance of McKinley Nolan,” had a sneak peak at the Independent Film Festival of Boston, where he spoke at the Discussing the Documentary panel. The film will have its proper world premiere in June, but Henry was excited to be screening the film for an audience:


“It’s amazing the first time you see your movie through an audiences eyes, it’s somebody else’s movie all of a sudden, you really can step back and look at it differently.” 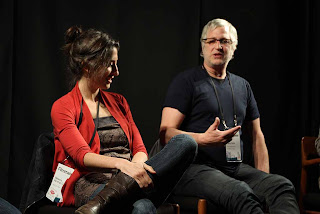 Rebecca Richman Cohen and Henry Corra
The idea for the movie grew out of a phone call he received shortly after he completed his last film, “Same Sex America

.” A journalist friend called and said he had been following an interesting story that started when a vet – Dan Smith - went on a trip to Vietnam and came across a man who had an American accent and who “had a very strange and kind of circumspect conversation with him.” The man said he was from Texas, and that he wished he could go home but that he couldn’t. He also said his name was McKinnley, but when the vet pressed him for more information he said he had to go, and disappeared into the crowd.

The vet went back to the U.S., and thinking he might have met a defector, reported it to the Department of Defense. When he was shown a photo array of different people he picked out McKinley Nolan. Henry goes on to explain that:

When the vet reported the sighting to the family, they made the immediate decision, the journalist, the brother, the wife, the son and the vet, to go and search for McKinley Nolan.

“I said [to Mary Nolan] “but you haven’t seen your husband or heard from him in forty years and there’s a rumor that he might have married this Cambodian woman,” and she just looked at me and said “Till death do us part. I’m human, he’s human…” That’s the moment that I knew I wanted to make the film.
“Later, McKinley’s brother, […] we were driving in his pickup truck and he said “I’ve had to walk with my enemy my whole life.””
Most documentary filmmakers, Corra says, write the film through the shooting. “It’s not like you try and remove yourself from having a point of view or a purpose, I just believe that it serves you well, and your subject well, to allow yourself to shift.”

“These films surprise you, what they end up being. I thought this was going to be a real detective story, an investigation, and it ended up becoming really a more deeply psychological study of longing and loss. An examination of the good and terrible things that perhaps all of us do.
"When we make these documentaries, we really don’t know what the films are about – or at least I don’t – but we have to pretend like we know what it’s about.”
When talking about making movies with constraints, and how they can shape a film, Henry related the story of shooting a film about his 12-year old autistic son George, the premise of the film was to give George a camera and have him shoot.


“His style of shooting was about not making eye contact. Anytime [the camera] would actually rest on something, it would drift off. We just decided that that was a great style, so anytime I interviewed these great scientists I would just, as soon as somebody started to say something important, I would push the camera away.”
During editing, Henry says he generally doesn’t work with transcriptions:


“It’s important to let the footage speak to you and to screen; this kind of film making is about screening the dailies very thoroughly, and how you select.”
When asked whether, when putting together trailers for incomplete movies to show funders, he feels any obligation to show an accurate representation of the complete movie he demurs:

“The early trailers are: ‘this is the notion, here are what I think the characters are, here’s what I think the story is going to be, and here’s the kind of feel I think that I’m going for at this stage,’ and again you’re kind of faking it.
“I show teasers or trailers or little works in progress, like that weekend in Texas on the Disappearance of McKinley Nolan. From those two days I cut together a six minute piece that I actually ended up being very similar to the first ten minutes of the film are now, but that’s kind of an anomaly.”
In conclusion, Corra says that what documentary makers do is try and capture an authentic experience:


“In a weird way, what we do is about performance, now I don’t mean to deauthenticize what we do, but you are thinking about getting an absolutely authentic performance that could never be repeated. When it’s something that can’t be repeated it’s very real.”

Posted by Michael Murie at 8:47 AM