This monring was the monthly Boston Media Makers meeting. The group meets the first Sunday of every month, and it's an eclectic group of people interested in social media of all kinds who show up. From video people, to writers, podcasters, artists, PR and social media people (I'm cribbing this a bit from the About page of the Boston Media Makers web page.) I enjoy going because there's always something interesting that comes up.


Final Cut Pro X
Before the meeting had even started, I found myself in a discussion with Matthew Gelineau and Adam Weiss about Final Cut Pro X. Matthew's a Final Cut Pro user who's deciding whether to switch to another editing environment.

My take on Final Cut Pro X so far is; I don't care about the features that are missing - the lack of XML and OMF etc., - as an individual editor I never used those features. No, what is currently vexing me is that it doesn't edit the way that I'm used to! I often set in points and out point for clips without even putting them in the timeline, and assemble sections in different parts of the timeline before bringing them together. Final Cut Pro X forces me to "Think Different" and so far, I'm fighting it! I'm not writing it off, but I do find myself going "I'll just edit this one in Final Cut Pro 7..."

Interestingly, Adam felt that he liked the way that Final Cut Pro X worked, because it matched his style of working quite well, even though he did think some features were hard to find when you were used to Final Cut 7.

The topic of Final Cut Pro X also came up during the main meeting. The impression I got was that several people hadn't actually jumped in yet - despite the low price - but were waiting to see how things played out. 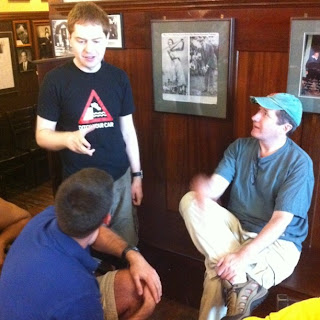 ltor Matthew Gelineau, Adam Weiss, Michael Murie discuss Final Cut Pro X.
Photo: Steve Garfield
Camera Discussions
The three of us also had quite a discussion about cameras; specifically the Sony EX3 vs the NEX-FS100 vs a DSLR of some kind (it's always interesting to see the eclectic combination of camera comparisons you can come up with.) If you were putting together a production studio, which way would you go?

It's a subject I've been thinking about a lot lately; if I had the money, would I buy a NEX-FS100 or a more traditional video camera like the Sony EX1/EX3? At the most basic level, here's how I compare the choice:

*The zoom lens/manual focus issue may or may not be an issue for you; most of the time I'm running and gunning and I like to have a good zoom with auto-focus!

I don't think we came to a conclusion!


Bloggie 3D
Steve Garfield brought along a Sony Bloggie 3D camera that he spoke about briefly. He's been uploading clips to YouTube, and the cool thing about YouTube is that it gives you a way to play back 3D content if you don't have a 3D TV (you just need some of those cheap cyan/magenta glasses!) The camera does give you a 3D-like preview on it's small monitor screen which is so-so.

I'm still not a fan of 3D, but it makes for a fun amusement ride!

Atomos Ninja
Adam brought along the Ninja video recorder, and gave a quick demo. This was the first time I managed to look at one close-up. It's solidly built - he said the case is aluminum - and seems simple to operate, though I couldn't figure out how to playback clips on it until Adam showed me how the navigation worked; it's not quite as obvious and simple as you'd expect, but it's not terrible (is that damning with faint praise?)

An interesting piece of gear, unfortunately most current DSLRs don't output full HD video out the HDMI port while recording, so it's difficult to justify using them with DSLRs to get better quality video (that would be the most obvious fix Canon could add to the 5D Mark III!) It would be a good companion to the NEX-FS100.


Other Topics
A number of other topics came up that were video related, including; a documentarian who is writing a book about creating and running KickStarter campaigns, a brother/sister team - still in high-school! - who are just completing their first film, and how to get a video on CNN!