The Great Camera Shoot Out 2011 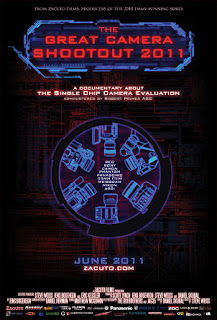 Last year, Zacuto produced The Great Camera Shootout, a comparison of several HDSLR cameras shooting under challenging conditions. In addition to the digital cameras, film tests were also made under the same conditions. The results were then screened for several cinematographers on a large screen, and the audience weighed in with their opinions. While there were no formal results - or a declared winner - there was a lot to learn both from the participants reactions, as well as from seeing the clips posted online.

I think the reaction can be summed up as:


the digital cameras don't have the latitude of film, but it's closer than most people thought it would be (including me!)

This year the effort was repeated, though with an entirely different selection of digital cameras. Mike Curtis, one of the team working on the test, has written an article for Pro Video Coalition that explains the process:

On the Tuesday of NAB, Bob Primes, who organized this year's event as part of an ad-hoc group the "Image Quality Geeks," presented the results of the tests in a presentation that was described as the "Single Chip Camera Evaluation" (SCCE.)

Already there have been reports from those that saw the tests, with the Sony PMW-F3 a clear hit, not necessarily because it was the best, but because of how good it was for the price. Philip Bloom tweeted shortly after seeing it:


Wow Sony F3 did so well in new Zacuto shootout. Sold me on it!

Sony had some awesome toys today. Want F3 more and more with every day.
- @PhilipBloom

And he just took delivery of one!


The Zacuto Shootout was extremely revealing & surprising, F3 came out REALLY well for price, Alexa was way up there too.
- @NinoLeitner

Went to the Zacuto screening and thought the "winner" from a quality & cost standpoint was the F3. DSLRs not so great.
- @veloeditor


...everyone was surprised to see this camera perform right up there with the big boys on most tests. This is probably going to be the surprise camera of 2011. Given its price tag, weight and form factor – it might just become the darling of 2011 for many.

And, he adds that they didn't have the benefit of S-Log for those tests, suggesting it may have done even better.

Vincent also high-lights a separate video test he was involved with during NAB that was shot by Khalid Mohtaseb and Jonathan Bregel from Next Level Pictures, using an F3 with the S-Log update:


...you will clearly see how incredibly well this cameras deals with highlights in S-log.   I’m not going to go as far as to say this is an Alexa contender YET – but I’d definitely like to see side by side tests w/ the F3 w/ S-Log and the Alexa and Epic…