The firmware update for the Sony NEX-VG10 is now available on Sony's U.S. website. There's versions for Mac and PC:

Sony's support site goes to different pages for different OS's (i.e. 10.6 Mac is here) but I think there are only two installers. 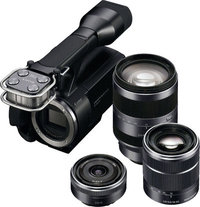 One Snow Leopard (Mac OS 10.6) user at the dpreview forum encountered a problem when he tried to run the installer:

I followed the instructions for Mac OS X 10.6 (Snow Leopard) and proceeded to update the firmware. During the update (Sony runs a small installer program that has an interface that shows the update being applied) the Mac Mini (new 2010 version) suffered a Kernel Panic and drew a grey screen and froze still!

The Mac was able to restart but the VG10 was dead- nothing I could do would cause the VG10 to operate (removed battery and restarted, removed SD card etc....camera was dead!)


Fortunately he was able to restore the camera using a PC!
Posted by Michael Murie at 9:17 AM