Anyone speak German? Here's a YouTube video of Sebastian Leske, a Product Manager for Sony, showing off the NXCAM prototype. But it's all in German.

A video in English from DigInfonews on the NXCAM. Nothing particularly new here, but it was shot at Inter BEE 2009.
[UPDATE: This video has been removed from YouTube, but can be found on the diginfo.tv site. 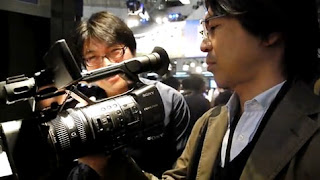 And if you speak Japanese, there's a second video from the Sony booth at Inter BEE showing people playing with the prototype NXCAM camera.
Posted by Michael Murie at 9:05 PM

They were all new to me ;) and the first one was posted in the middle of December.