Just saw the Cohen brother's latest movie "A Serious Man." I enjoyed it, though it's a black, black comedy, so I'm not sure I actually want to watch it again(!)

What I found particularly interesting was the color work that had been done on a lot of the scene's; Cyan and Yellow have been removed so that it looks like aged film. This was done throughout the movie in varying degrees and it's particularly noticeable on some of the exterior scenes like the car crash below. 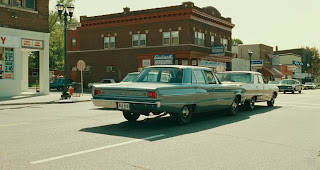 But check the shot below. The flesh tones look as though they have been manipulated like much of the rest of the film, but the blue of the dress (and probably the wood behind) has not been altered. (You may want to click on it to look at the larger file.) 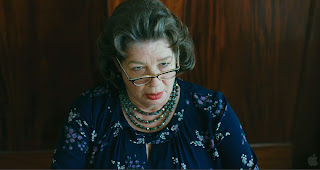 Posted by Michael Murie at 9:11 PM