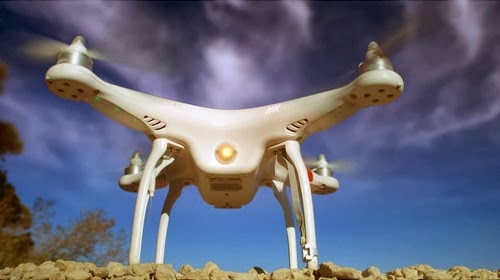 Things seem to be heating up in the drone world. And I'm not just talking about Amazon deliveries or Facebook.
Just back in December the FAA announced that it was - finally - going to get a move on about drone regulation, and picked six test sites to evaluate drones. So we're all on track for new rules by 2015, or 2017:
FAA names 6 sites for testing drones | USA Today


The Federal Aviation Administration named six teams across the nation that will host the development and testing of drones to fly safely in the same skies as commercial airliners.
The announcement represents a major milestone toward the goal of sharing the skies by the end of 2015, in what is projected to become an industry worth billions of dollars.

Meanwhile, everyone's buying drones, so some people think the FAA is in danger of losing the war:
FAA risks losing drone war | Politico


The result, observers and drone users warn, could be a Wild, Wild West in the nation’s skies. As small drone operators grow used to flying them without the FAA’s permission, they could become less inclined to obey any rules the agency puts in place. And with the cost of the technology continuing to drop, the drones could eventually become far too ubiquitous for the agency to police.

Meanwhile, the FAA strikes back with seven myths about drones:
Busting Myths about the FAA and Unmanned Aircraft | FAA


Fact—The FAA is responsible for the safety of U.S. airspace from the ground up. This misperception may originate with the idea that manned aircraft generally must stay at least 500 feet above the ground

Which got some press:
Listen Up Drone Operators: FAA Has 7 Myths To Bust | Forbes


Commercial operation of drones is not a gray area of FAA regulations.  All aircraft – manned or unmanned – must have some type of FAA approval.  (Model aircraft flown as a hobby or for recreational purposes are excepted but must be operated in accordance with model aircraft guidelines and away from populated areas.)

While the cinematographers and photographers seem to get most of the FAA attention, other industries are just as interested:
The Future of Drone Use in the Insurance Industry | Claims Journal


“We hang this whole thing on privacy, but to me, I think the privacy issues have long been decided with commercial aircraft. Small private aircraft or helicopters, it’s pretty well documented that if you’re doing something in your backyard that is still within public view of a passing‑by aircraft, you don’t have a reasonable expectation of privacy, and that’s been upheld through Supreme Court rulings for a number of years,” Goldsmith said.

The following article is very articulate, arguing that really, the FAA has got it all wrong and can't go around telling us we can't fly drones for commercial purposes, etc., etc. And I can't help thinking it reads a little like those articles about the IRS being illegal. If you want to take on city hall, good luck.
FOIA Response Reveals FAA Routinely Misrepresents the Law Regarding Unmanned Aircraft | DIY Drones


Each of these letters is premised on the notion that the FAA's 2007 Policy Notice creates a mandatory prohibition that is binding on the general public. However, by law a mere "policy notice" by a federal agency cannot create legally binding and enforceable obligations on the general public. Only "regulations," passed through the proper notice and comment procedures dictated by the Administrative Procedures Act, can be considered mandatory.

For a bit of a change of pace, this piece suggests that the Canon VIXIA mini X ($399) would be a good camera on a drone:
Canon’s Vixia Mini X is a Compact Camcorder with Clean HDMI-Output | Photography Bay


Canon considers the camera a “personal camcorder” for a niche audience looking to record hands-free using Canon’s oscillating Pan Table, or as a remote camera for drone use and (almost) action camera scenarios.