Last week Vincent Laforet spoke at a meeting of the Boston Creative Pro Users Group about filmmaking with the Canon C300. The event happened at Emerson College's Bright Family Screening Room at The Paramount Center  in Boston. Vincent started out the evening talking about his career as a still's photographer - he worked for The New York Times for several years - and showed some stunning examples of his work (he didn't actually mention it, but he has a book out of his still images: Visual Stories: Behind the Lens with Vincent Laforet (Voices That Matter). He also showed several tilt-shift images he had taken, claiming that he was doing it "before it got popular again."

He mentioned "Reverie" - the movie he shot with the Canon 5D Mark II - only in passing, and then, saying that he didn't mind ruining the secret, he showed the behind-the-scenes video made about the making of the short "Mobius." He then talked a bit about shooting with the Canon C300, and then showed the movie itself. He also talked about other cameras, particularly the RED Epic and the Arri Alexa, and about the effect smaller, cheaper cameras is having on the movie industry. 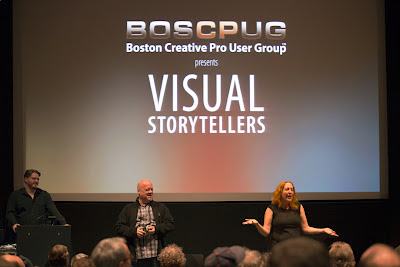 I treat all of these cameras like different film stocks. I've shot with the Alexa, the F3, the Epic, the RED One, the Phantom, all of them basically.... I think the Epic shines in certain places, whereas the C300 shines in other uses, especially in terms of small size and light weight. You can't [waves the C300 around] do this with an Alexa. That's a very big deal actually.

Now is this an Alexa killer? No. The Alexa definitely has a higher dynamic range, definitely on the high-lights; it's the best camera bar none. Even people from RED will tell you that. I don't know if you know this - because I only just learned it - but the Alexa actually does two passes on each frame simultaneously. So it does a high db pass and a low db pass; it's actually doing HDX itself, the whole time, they just never mentioned it.

The RED Epic, little monster, 5K chip, but who really needs 5K is the real question? I have been showing stuff at 720 and 1080 back and forth this whole night, and nobody can really tell. At the same time, there's no way to dispute the fact that as a filmmaker I like 4K or 5K because I can stabilize the image in post.

One of my main disappointments with the C300 is [that it's] just 1080, and there's nothing higher that 30 frames per second at 1080. You've got to go to 720 to get 60fps. That's the one limitation of this camera. The advantage is; the low light sensitivity of this camera is probably the best in the world. I'd stick my neck out on that one. Closely followed by the PMW-F3, but there's no camera that sees in the dark like this camera. It's unbelievable.

Vincent did point out that the C300 has a 4K sensor, and acknowledged that it only outputs in 8-bits, but he said; "I'll take a very rich sensor with tremendous latitude and compressed down rather than something less performing." He also pointed out that there's basically no advantage to using an external recorder with the C300.


What makes this camera so special; the noise/grain structure with this camera is very special, which I have not seen in any other camera, except perhaps the Alexa. If you look at this noise pattern, it kind of looks reminiscent of film. Having worked in black and white darkrooms, this looks awfully similar to what black and white TRI-X film neg looks like to me.

What happens with this cameras as you try and push it and break it, you're going to find this interesting noise pattern, unlike the blotchy blueish banding that you're used to.

As a Director or DP you basically watch that histogram on the scope and make sure you stay 100 IRE or below, and when in doubt, underexpose and dig it out from the shadows. It really holds up unlike any other camera I've seen, other than perhaps the Alexa.

He talked at some length about how the small size of the Canon C300 made it possible to quickly and easily do different set-ups and that this was how they produced Mobius on a limited budget - for a "hollywood shoot" - of $125,000-150,000. The total "all-in" for Mobius was $200,000, and while he acknowledged that for many indie projects, that was a lot of money, for a Hollywood budget where "everyone was getting paid" it wasn't. 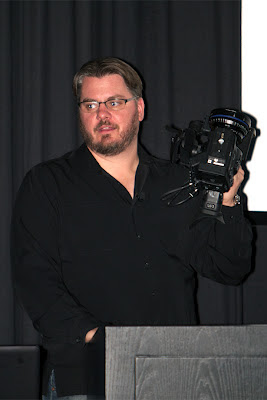 Vincent Laforet holds a Canon C300 on loan for the event from LensProToGo.com
PHOTO: Donald Bérubé - http://donaldberube.mobi
Vincent stressed that while the C300 makes it possible to shoot a lot of things without lights, that doesn't mean that you should give up on lighting:


You maximize the parts where it's going to pay off [because] you can't light everything in three hours with 50 shots a day. Let those go, and get the best quality you can, with framing and bounce boards and negative fill, and then maximize the look on a few scenes.

Everything we shot, we shot at 850 ASA, which is the best dynamic range off the sensor, and we shot in Canon - log. It's a very light log, you don't need to have a LUT on set.

At the end, Vincent spoke about making the change from DP to Director, storyboarding (he always storyboards, saying that he's done enough shoots where he didn't storyboard and he's always regretted it) and he also recommended a book Save The Cat! The Last Book on Screenwriting You'll Ever Need which he said was good, but will ruin the movies for you!

He concluded with this thoughts about the new cameras:


The danger is, for all the professionals that are used to the fancy toys, we're going to be a little bit scared now because there's a danger of younger, less experienced people charging a tenth of the price and flooding the market. It's our job to actually help educate [clients] on how we can make a living doing this, but also we can't hide behind the gear anymore. It comes back to ideas.