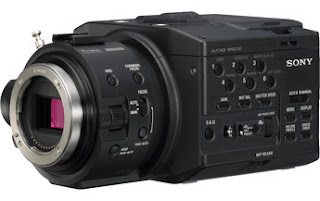 Video Review
Sean Seah at Firewerks Films in Singapore got his hands on an NEX-FS100 and put together a short video review. He thinks it's a really nice camera and demo's how the microphone mount, LCD and VF tube work. He doesn't like the adjustment for the hand grip, and says that hand holding it is "a bit weird," either with or without the VF tube.


"And yeah, one glaring omission; where's the ND filter?"

The last half of the video (starting at 6:20) has video taken with the camera, including some low-light stuff.

He also points out something I hadn't realized; the FS100 is available in an NTSC and a PAL version, and the PAL unit doesn't shoot 24p or any of the NTSC rates, while the NTSC version won't shoot 25p.

He's posted some actual clips he recorded on the blog too.
MynahMedia: An Hour wuth the Sony NEX-FS100U

Kampong Glam - Sony NEX-FS100 Test
Ng Chee Teng also got to spend an hour with the camera and shot this video. You should go to the Vimeo page to read his impressions:


Low light and low noise is definitely its selling point. Definitely better than AF100 in this regard. I also tested AF100 briefly before with some noticeable noise.

15db gain is surprisingly very usable although I feel 30db is reserved for documentary use with its noticeable noise. A better lens will definitely do wonders for this camera. The absence of a ND filter wheel is also an issue but it can be overcome with a mattebox.

He also doesn't care for the kit lens or the lack of an ND filter.

Note: He mentions aliasing issues in the video, but has posted an Update at the end of the article:


I have allowed some people to download the raw file and they have tested no aliasing on other editing software. The aliasing could be a problem to Premiere Pro CS4. I will investigate this on Avid Media Composer 5 and re-edit it there if this is indeed true.

Pricing
Finally, if you're wondering why you can't yet pre-order the camera - though places like B & H list it with a price - it may be partly because pricing isn't yet finalized. In a post on the DVInfo.net forum, Andy Shipsides from Abel CineTech says that "real pricing" hasn't been announced, and won't be confirmed until probably sometime after NAB.

Posted by Michael Murie at 5:00 PM