Finishing Artist and VFX Supervisor Dermot Shane dropped me an email about this short interview piece that he recently graded.  The piece itself is an interview with Scott Duncan talking about his passion for visual imagery and working with the Arri Alexa, but it was also shot with the Alexa, and Dermot reports that he really likes grading footage from the Alexa.


Dermot offers some impressions on working with Alexa footage below.

Scott Duncan & Arri Alexa / in the moment from Michael Haldane on Vimeo.


Why I Like Working With ARRI Alexa Footage
- First the workflow is simple and clean, assembly took maybe one minute all up and I had a full resolution timeline that matched the off-line perfectly, so a good start to a session for sure.

- Second it was a joy to have the clean blacks, the lack of noise makes secondaries very easy to use, I can isolate color with precision, and without artifacts

- Third the skin tones feel "real" straight out of the box, just apply a LUT to correct to 709, and you are most of the way to a great image. If that's the image you want, it's there instantly.

- Last the latitude is impressive.


Breakdown Of The Three Groups Of Shots: 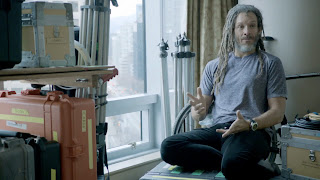 All the interview shots are untouched basically, log to lin LUT applied, and secondaries on the yellow & orange camera cases to reduce saturation, a soft roll off on the highlights in the sky behind him. I know the detail is a bit lost on the vimeo clip, but it's all there on my monitor.

The skintones are untouched, and there is no reason to touch them. I could've brought down the blue highlights, but that made the world outside the window seem pretty cold, and we decided to let it be "real." That was a good choice, but if we had decided to re-build the shots with neutral highlights I could have done it easily. 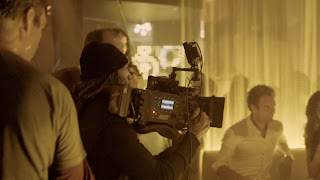 The shots in the studio are @ 1600 ISO. The clean blacks are really good; I didn't use nose reduction anywhere, on any clips. We went for a bit of a stylised feel for this stuff, beyond warm, and verging into monochromatic yellow, with blue highlights. This was mainly done in post [though] from the camera masters we could have created a million different looks. 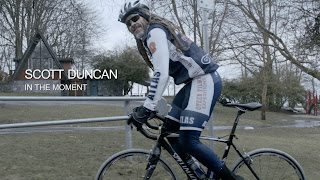 The bike ridding shots were the most challenging; sun, rain, clouds, blue sky; you name it, I had it on the timeline. Here is where the super clean master was pushed, there is a ton of secondaries on sky's roads, trees, jacket, skin. The ability to precicly isolate the depth and width of a color is key, and that falls apart if there is significant noise; the edges tear, then you have to loosen up the isolation to compensate

I didn't really have many limitations with this camera, and that was good as a lot of these shots were retouched significantly!


How Does It Compares To Other Cameras?
It's really in a class of two; the ARRI Alexa and RedMX (+ color2) is the other. Both are great; there's more latitude with Alexa, more image with the RED. Going to HD? Alexa would be a good choice, shooting VFX plates for Cinemascope? I'd choose RED.

I have not had to yet, but I'm not worried about matching these two cameras...
- Dermot Shane


SEPIA Films: Dermot Shane
See also NotesOnVideo: Visual Effects for "A Shine of Rainbows"
Posted by Michael Murie at 9:00 AM

Cool man. Such people are charged with motivation and inspire feats. I used to book review writing service and wrote a lot of information about such inspirational people.