Den Lennie on the Sony NEX-FS100

Yesterday, Den Lennie from F-Stop Academy took part in a web chat with Mitch from Planet5D about the upcoming Sony NEX-FS100. The replay is supposed to be up today, and it's worth checking out if you're really interested in this camera.

Den is up front about his involvement with this camera, which began over a year ago when he was asked down to Sony to a meeting to talk about DSLRs. When he - and several other camera people - got there, an entire team of engineers were present, and they wanted to know what the focus group liked and didn't like.

"We essentially designed a camera on the whiteboard," he said. "They didn’t give us everything we asked for, but they went 90% of the way." He added that he thought Sony realized they had not been listening to customers, and were now "all ears." He even brought up a photograph of the whiteboard to prove what they had done.

Sony, he said, had noted the uptick in DSLR sales, but this camera wasn't intended to be a "DSLR killer." Rather, it was intended for the event, music-promo, and commercial shooter; [to me it sounds as though Sony were trying to hang on to those who were previously buying EX1's and HXR-NX5 cameras, but have been attracted to the DSLR.]

He also noted that they weren't exactly paid for their participation, "I think they gave me an SxS card to cover expenses." He also wasn't paid for the shoot that he did last weekend with that camera... 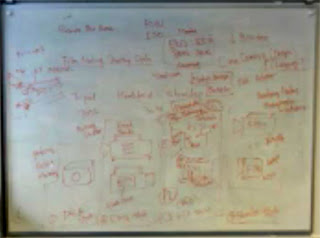 "This will prove to you that we weren’t lying when we said
we sat in a room and designed the camera…."
Fast-forward to last weekend and Den got a call from Sony asking him if he would appear in a promo video about the new camera. They wanted to interview him about the Focus Group, but they added that they had a camera coming, and did he want to borrow it for the weekend?

He went on to explain how the weekend went; the camera arrived Friday evening with only the fairly slow standard lens; no batteries, and no adapter to attach additional lenses. In the end they even ran out and bought a couple of inexpensive A-mount lenses to use with the camera. And though they did some tests of rolling shutter and moiré and picture styles before shooting, it was all very, very rushed.


What are my thoughts on the lack of the ND filter? We asked for it. Sony said they can’t [do it and] keep it small.

HD-SDI & single HDMI: [HD-SDI would] drain too much power. We used HDMI out and it was fine.

You don’t need two HDMI’s. You want to have as little coming off the camera as possible. The HDMI is a large one at the back of the camera. If we’d had the Zacuto EVF, we could have looped through out to [other monitors].

The HDMI thing wasn’t a big deal breaker for me. I generally couldn’t care less if it’s HD-SDI or HDMI, the signal is the same.

It's 24Mbps. [The video on] Vimeo doesn’t do it justice. James [the guy that did the color correction] says it’s cleaner than DSLRs. The images coming off the camera remind [James] of working with the RED. There is noise there, but it’s very “clean” noise. When looking at T2i footage and the FS100, it was night and day.

Initial experience with the camera was a very positive one. The sensitivity was staggering.


Don’t be put off by looks, It rocks. We had it designed that way for a reason, because it fits in the plam of your hand. There’s a tendancy to pimp out a camera, but in some cases you want to be able to strip it down. Trust me, when you pick it up and start shooting with it, it will make sense. We were able to walk around with the camera in our hands and nobody stopped us.

Other Functionality
Asked if he thought the NEX-FS100 had been limited so it didn't compete with the PMW-F3:


Was the FS100 limited? I don't know, at the end of the day, Sony is a business. The F3 is ten grand. To make it more affordable, they have to take features off. I don't know the answer to that. For the money, it's a staggering piece of technology, and it's not going to be everyone. But I would trade my EX1 for it tomorrow.

He added that he's doing a Facebook chat with Sony Europe on the 5th of April. He said that Sony Europe wanted him to go to NAB, but that the show is run by Sony US, who "doesn't know him."

[UPDATE: Added link to podcast replay in Resources]
Posted by Michael Murie at 9:00 AM

Very good comments on the chat thanks for the resume