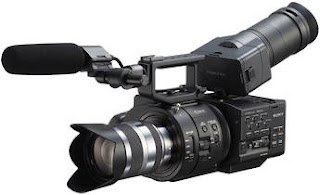 Reader Varun Gathani added the following comment to the post: The Canon C300 or the Sony FS700?

Hey Guys, I've read what all of you guys have had to say... and I agree with all of valid points made. For me the only two options at this point is either to buy an FS700 or Not! As thats all i can afford right now. However would you guys say its a better option to a Canon 5d Mark 3 or a 1D with its 4K for that matter. I am really confused weather FS 700 is worth investing all my savings into?

One of the most important things to remember is that there is no perfect camera, no one-size-fits-all, and no one 'right' answer that applies to everyone...

That said, if I was trying to decide between the Sony NEX-FS700, the Canon 5D Mark III or the Canon 1D C, I'd pick the NEX-FS700 every time. Why? Because it's a video camera. It has built-in ND filters, good audio monitoring, an LCD that's pretty good for monitoring, XLR audio inputs, and on and on.

I'm not saying the Canon 5D Mark III is a bad choice; there's reasons why you might even prefer that camera. Briefly, it's smaller and more discrete, and it's a full-frame sensor, which provides a slightly different 'look' to the Super35 sensor in the FS700. And if you already have a bunch of Canon L lenses that you like, I can understand why you might like a Canon camera that will work seamlessly with those lens. Finally, you can get a nice image out of the 5D Mark III. For that matter, I’ve also seen great things shot with the T4i. But you have to work harder (no ND, more difficult to monitor, etc.)

You don’t say what you are shooting (what’s the delivery medium; web? TV? Film?) That obviously could alter the decision. I think you can shoot great things with a DSLR, but you have to work harder and they have limitations.

The Canon 1D C is a DSLR as well, admittedly with 4K capabilities. Also, it’s more expensive than the NEX-FS700, so I’m wondering if you really meant that camera? In the US the 1D C is $11,999, which I think is way too much. Do you really need 4K? If you do, you would probably be better served by the NEX-FS700 and the AXS-R5 recorder, which enables 4K recording with the NEX-FS700. In the US, the camera and recorder together will cost you about $13,500.

Now you’ve said that the NEX-FS700 is the most you can afford (which is why we’re not talking about the Canon C300, which was the subject of the original article.) But what about the Canon C100? That’s a little cheaper than the NEX-FS700. There’s pros and cons to both the NEX-FS700 and the C100, which I’m not going to go into here. But if I had an $8,000 budget, those are the two cameras I would be looking at because they are both video cameras, and I’d ignore the DSLRs.

If you’re on a tight budget and can’t justify spending so much, then buy the 5D Mark III.
Posted by Michael Murie at 6:30 AM