I just bought a Roku LT Streaming Player player. I bought the “cheap” RT model, which is limited to 720P, partly because Amazon was having a sale on it, and partly because I didn’t really think I’d see much difference between 720P and 1080P. The 720P looks pretty good to me, but then I watch DVDs quite happily as well. 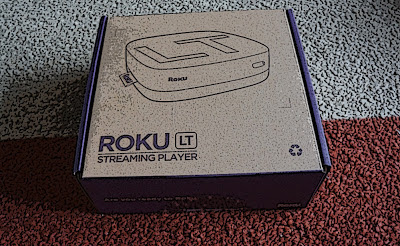 I also have a first generation Apple TV, which I don’t use as much as I had originally thought I would. I use it to occasionally rent a movie, but I do that so infrequently you could probably count the number of movies I’ve rented this past year on the fingers of one hand.

The reason I bought the Roku was not because I was looking to replace the Apply TV, or I was unhappy with it in any way. Rather, I got it because I have an Amazon Prime membership, and the Roku, unlike the Apple TV, will stream Amazon movies.

And with Amazon Prime you get access to quite a few movies and TV shows for free. It’s not endless, but as a free add-on (free after the $50 for the box, and $75 for Amazon Prime I’m already playing) it’s pretty good value! I’ve also watched Amazon movies on my MacBook, and even on the iPad (using the Amazon player app). Both work very well, but sometimes I’d rather just watch a movie on TV. 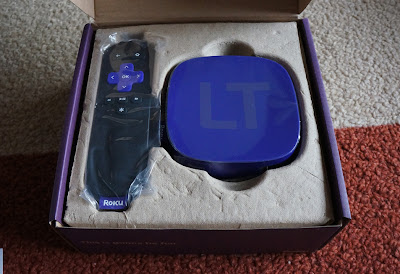 The player and it's remote

Installation is simple, though I wish it had come with an HDMI Cable rather than the old RCA cable. I had to spend another $5 to buy a cable from Amazon. The power supply is in a small brick attached to the power plug, which is always problematic when you are plugging them into a power strip.

When you set up the box, you do have to register it with Roku, and give them a credit card. I actually used a Gift Card that I had to register the device.

Operation is simple and straightforward. It’s much like navigating the Apple TV, though when scrolling through a list of movies it has the habit of repeating the same movie multiple times in the list (at different places.) That’s probably an Amazon issue rather than a Roku one. 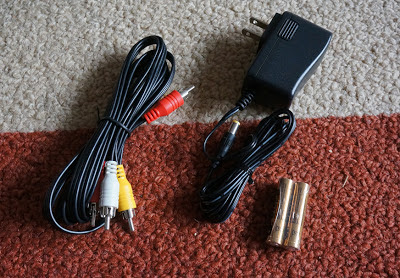 Cables, adapter and batteries for the remote are the only other parts included

The image quality at 720P on my TV is very good. I watched four movies over the course of about five days, and they all played well except for one. Towards the end of Clear and Present Danger the movie started hiccupping every minute or so, and even flashed to a green frame at one point. I don’t know whether there were problems with the download, the transmission, or the encryption of the movie. It’s not something I’ve had happen with Apple TV; though I have had that pause because it was unable to complete downloading a movie, but it’s never hiccupped. I’ll be interested to see how often this problem occurs.

But if you have Amazon Prime and haven’t been making use of the free movies, then I’d recommend this device.