Yesterday Adobe hosted a webinar with Adobe Product Manager, Al Mooney. Mooney began the demonstration with an analogy: “If Premiere Pro was the car, and the Mercury Playback Engine was the engine, then we had a beautifully engineered engine, but the car wasn’t quite as good.” So this release, to further the analogy, is all about tidying up the car. To that end, they focused on two things:


It all sounded good, though maybe a bit like the Final Cut Pro X demo. 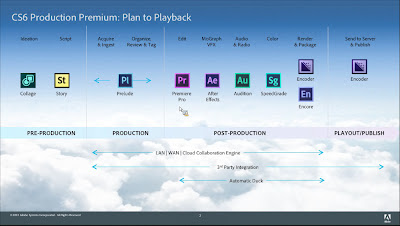 The Adobe CS6 Production Premium software
According to Mooney, “the minute you launch it, you’ll immediately notice the redesign.” They removed unnecessary noise, clutter, and "chrome" (the gray space around the interface elements.) There’s “a lot less gray and a lot more video.” If you don’t like the new default layout, you can go back to the CS5.5 default workspace, “but I’m pretty confident once you get used to it, you’ll find it better.”

In CS5.5, Premiere Pro had 22 separate different buttons and controls under the video panel. Now you can fully customize the Source and Program monitors by adding and removing these controls. You can even hide the buttons at the bottom of the video panel if you just want to use only key strokes to control the editing process. Oh, and the Shortcuts have changed too, but you can also revert to CS5.5 if you prefer.

Mooney said that “after extensive market research,” they decided that 16x9 was the future of video, and now the thumbnails in the Project panel are 16x9. In another change, what were thumbnails can now be enlarged and they have implemented “Hover scrub” (‘you might call it skimming, we call it hover scrub.’) The thing I like about what they have done; you can actually set in and out points for separate clips in the Project panel, then build a sequence from that. This is what I wish Final Cut Pro X had done!

Another nice thing; usage icons on the thumbnails in the Project panel tell you how many times the media has been used in the project, and even take you to where it is in the sequence. 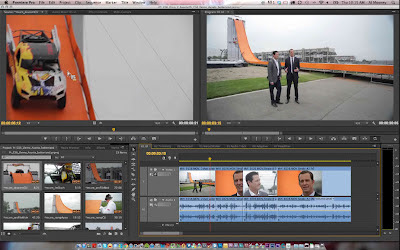 There’s a whole host of other little changes in the UI;
It many ways it feels like Adobe took a look at Final Cut Pro X, and added some of the features of FCP, without abandoning the "traditional" NLE interface in Premiere.

Noting that Premiere used to be really, really good at stopping playback whenever you did something, Mooney said that they’ve now added a new feature he called; “Don’t Stop Playback”. Playback continues while you’re adjusting editing and effects – though it only applies to GPU accelerated effects.

Multi-cam
Premiere Pro CS5.5's multi-can was limited to four cameras. Now it support's as many camera angles as your system can cope with. You need to make sure you have disk bandwidth etc., but there’s no limit on cameras. Unfortunately, the current release does not include any PluralEyes type of synching.

Audio
The audio mixing had been improved, taking some elements from Audition. The previous version did not handle tracks with mixed sources; mono and stereo in the same track. Now they’ve added a new audio track type called the Standard Audio track. You can mix stereo and audio clips in the same audio track without having problems, and it can now handle 16 channels of multi-channel audio. 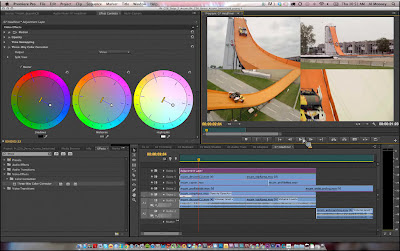 GPU Acceleration
CS 6 has added limited support for Open CL, so if you’re a Macbook owner with “a very specific kind of video card,” you may get to use GPU acceleration. When asked why they did that, Mooney said “We have a limited amount of testing resources. We target the MacBook Pro because it seemed to be one of the most used systems out there. We targeted those two cards.”

When asked about whether other support might be coming, he said “We don’t comment on future releases, but if you look at the past you can see that we think it’s important to support as many GPUs as possible.”

Prelude, Tape & Long-GOP
When asked if Prelude would support tape, they acknowledged that it doesn’t, and though it replaces OnLocation, there are some features from OnLocation that people are expecting that aren’t there. Prelude is 32 bit, not 64bit.

Said Mooney “there are so many things in this industry that won’t die, and tape is one of them.” He went on to say that they are realizing there’s still a huge requirement for tape. Tape ingest will be left to third parties, but they have worked closely with the third parties to improve tape handling so it should be more robust.

With the arrival of Prelude, they were asked if there is now an ordained workflow? No, says Mooney, there’s many ways of doing things. For example, with DSLR video, “You can import directly into Premiere Pro, but if you are using long-gop formats, you’ll never get the same performance as you will from short-gop formats, so you might consider bringing it in through Prelude and doing a transcribe, though you don’t have to.”


Cinema DNG
When asked about the Blackmagic Cinema Camera, Mooney said “We were as surprised as the rest of you about the release by the Blackmagic.” He went on to explain that CinemaDNG was a piece of Adobe technology that “we released out into the wild.” Premiere will import and understand it, but “you’re not going to see great playback performance.” They said that they are working with Blackmagic and are “considering” working on the performance.


This was one in a series of webcasts that Adobe is offering over the next few weeks. If you’re not familiar with Adobe’s upcoming release, they are probably worth checking out: